Swamp monsters from the Somerset Levels return to eat you alive 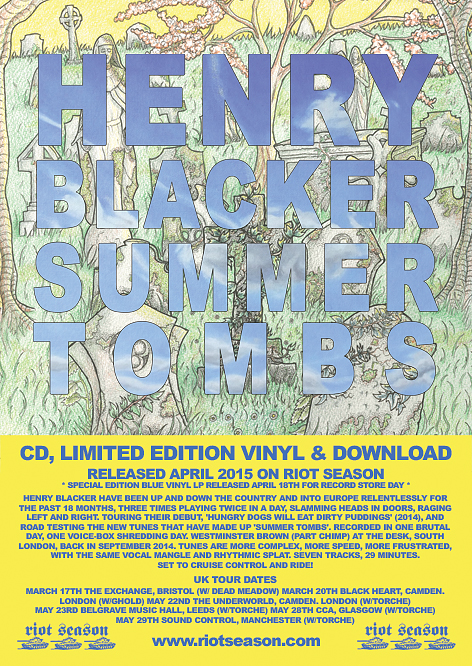 The West Country’s power trio Henry Blacker return with a piece of fuzz guitar soaked mayhem to turn your brain into sludge. The band consists of two members of the awesome Hey Colossus. The current line up is made up of bassist Joe Thomson, Tim Farthing on guitars and Roo Farthing on drums, piano and organ. Summer

Summer Tombs is their second slab of awesome sludge/stoner rock following Hungry Dogs Will Eat Dirty Pudding in 2014. Summer Tombs was recorded during September last year by Westminster Brown at the Drop Out Studios in South London and mastered and mixed by Roo. This has cumulated in the band delivering an awesome album for our pleasure.

First track Cold Laking kicks off this album with fuzz guitar the Kyuss boys would be proud off. The monster is now released! Understated deep meaningful vocals hover over the track like a bird of prey looking for its next meal on The Levels. The vibe here produces a sonic induced sound so deep and powerful that you wonder what these guys can achieve as this album progresses. No worry there. Next up one of my favourites, Million Acre Fire - boogie sludge heaven this one. Get that head banging. Shift Magus and The Grain are another two grinding stoner sludge journeys with clever lyrics and sang again with restrained power. At times the vocal power is released and you take note, boom!

"Cold Laking kicks off this album with fuzz guitar the Kyuss boys would be proud off."

Landlubber is a head battering feast of muddy power. I heard a little Henry Rollins in there from the Weight era. Nice. A Plague is a fuzz dripping sludge monster of a track with a little ditti at the end. Now to the final track, are you still with me, you need to be. Summer Tombs is a seven minute long masterpiece. It’s the nearest to a heavy shit ballad on here. The track starts with a relaxing heavy vibe, smooth vocals (Henry Rollins again?). The fuzz guitar lead’s the way for a growl vocal to be released which then leads to them releasing the Levels demon. It feels like the Demon is being summoned to do it’s bidding. Then it is released, a driving sludge boogie builds up to a swamp stampede taking you down the dirt track to oblivion. Everyone is slaughtered. Loved it!

This album totally grabbed me and sucked me into their world. I listened to this at times drinking Scrumpy, I was on the Levels with the monsters. Might have drank too much of the stuff thinking about it. If you are expecting Morris dancing tunes stay well away but if you like stoner, sludge, loads of fuzz etc then this album is for you.

An English power trio doing the business, proud I am and you should be. Buy the vinyl edition when it’s released on Record Store Day the 18th April. Get your ass’s down to your local independent record shop and purchase, I will be. Also catch the boys live supporting the mighty Torche at the end of May. On a final note I would like to say a big thank you to Andy at Riot Season Records for all his hard work in releasing albums like this for us. Cheers!