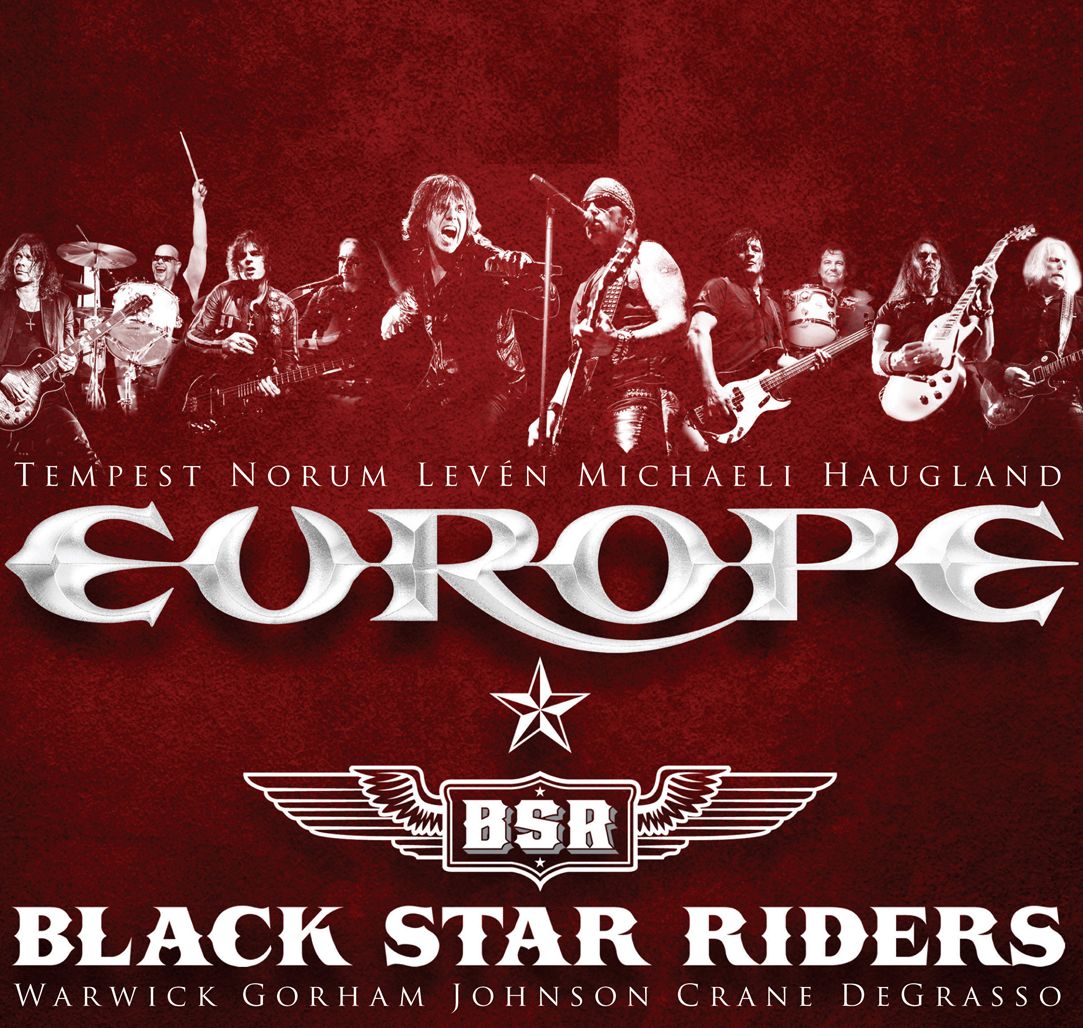 The Black Star Riders are riding high at the moment with a new album, Killer Instinct, smashing into the charts, packed full of great songs. It is a huge complement to the previous album, continuing to prove that they are a great band in great form.

BSR hit the stage with Bound For Glory showing Ricky Warwick's voice was in fine fettle and less like Phil Lynott’s than some would say. They were then straight into the first Thin Lizzy cover, Jailbreak, where the band gave it a more modern feel and sound.

Kingdom Of The Lost had a great Irish feel but the backing vocals were disjointed and flat, someone couldn't sing and it certainly wasn't Warwick. There was no time to lose in this short set so it was straight into Charlie I Gotta Go presenting a more commercial edge to their sound.

Considering there was a lot of competition for rock fans this evening, with both HRH AOR and Hammerfest taking place this weekend, it was a surprise that the gig was as full as it was. And the fans were not to be disappointed, songs like Hoodoo Voodoo with its classic Lizzy twin guitar sound hitting the spot.

For Soldierstown Warwick taught the audience some Gaelic so they could sing along with the song, which again was full of Irishness and Lizzyness. This resulted in parts of the crowd getting involved in silly Irish country jigging which was great fun to be involved in. Next there was a complete change of mood and back on Lizzy ground with Are You Ready To Rock which was performed with a renewed intensity from the band.

Warwick then thanked the crowd for buying the album as it had landed in the UK national charts at number 13, the band then launched into Bloodshot and The Boys Are Back In Town. During the latter I briefly closed my eyes and it was like listening to Lynott again. Even the bar staff were dancing around, the song getting the biggest response from the audience.

Through The Motions had a funkier edge and judging by their onstage performance they certainly didn't look as if they were going through the motions. Scott Gorham's playing was excellent although he was fairly static compared to the rest of the band, even during All Hell Breaks Loose. Back to Lizzy again and it was another twin guitar solo assault during Emerald.

Warwick told us that when he was growing up he would regularly listen to Radio One and never dreamed he would be on Radio Two, let alone be single of the week on that radio station - but he would take it. And it is understandable that it was single of the week because Finest Hour is a great song, expanding their popularity. Back to Lizzy again, well technically a Bob Seger song, and it's Rosalie played at full force with the crowd fully joining in. "This is Manchester" Warwick shouted, he certainly got his geography O-level, and everyone sang the song louder still.

"Everyone is plain crazy these days but you have to live with the Killer Instinct" was Warwick's introduction to the title track of the album. This was well-known and well received by all present due to having been played regularly on local rock radio. This led us into the final song, the Lizzy classic Whiskey In The Jar which was interesting because none of the band played on the original but nobody in the audience minded.

There was no encore due to the lack of time but it had been a full onslaught of songs from the band. Considering the name change and that they have now put out two solid albums of their own it was a surprise that they were still playing six Thin Lizzy songs in the set. Is the Lizzy material a flag of convenience considering the strength of their own songs? Answers on a postcard, please.

After a break Europe hit the stage to a thinned out crowd launching into new song War of Kings, a brave move starting in this way but in comparison to Black Star Riders who were raw and edgy, these guys were slick and professional, and sadly predictable and boring.

Joey Tempest bounced around the stage with loads of energy throughout the set but still came across like a Jon Bon Jovi imitator. Big dramatic sounds in Last Look At Eden along with dramatic lighting was failing to get the crowd going. One thing in their favour though was that the material was coming from a whole range of albums, Girl From Lebanon being taken from the Prisoners album.

They are a very different band to Black Star Riders and equally different to the band who had hit singles in the mid to late 80’s, they are now striving to become a credible rock band. Sadly they are coming across as clichéd, almost like they are going through the motions. Superstitious sounded like a poor man's Deep Purple.

Even playing The Second Day, a favourite of the band, they were dull and uninspired, not the band I saw three years ago. And the crowd seemed to be agreeing as well as there were less and less people to watch them.

"Black Star Riders who were raw and edgy, these guys were slick and professional, and sadly predictable and boring. Not the band I saw three years ago."

Another new song, Praise You, was greeted by silence. Had no-one bought the new album? It started to become apparent what everyone wanted but the band was going to make us wait.  Sign Of The Times managed to get significant audience involvement from those left, although Riches To Rags and Firebox again came across flat. Joey Tempest then took on a David Coverdale persona with the way he threw his mic stand around.

Finally, on more appealing ground was Rock The Night from the Final Countdown album, again with more mic stand twirling followed by another new song Days Of Rock'n'Roll which left the audience unimpressed. The last song finally put us out of our misery with the opening synth notes which could only mean Final Countdown itself. Again no encore due to time constraints and no “Carrie” either, but I was happy it ended because to be perfectly honest I was bored.

And the final words are not mine, they are those of a friend, Jo…

"Europe - this shit could have been written and performed by anyone, they were just going through the motions!”

Reply blueday
1:35 AM on September 8, 2021
finasteride 1 mg no prescription needed