"The faster and crazier your music is the more adrenaline pumps through you." 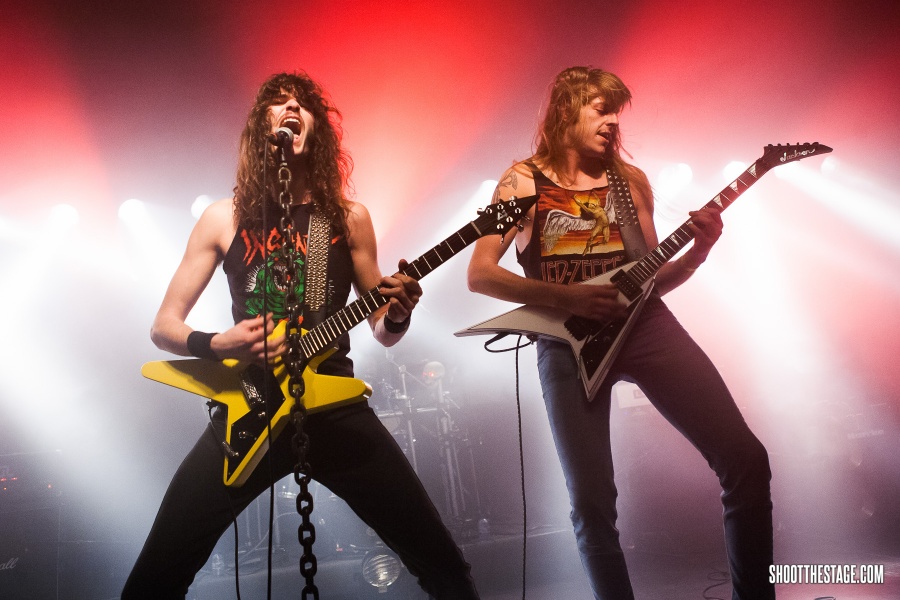 Mick sits down with the frontman, Joe, of thrash metal up and comers Evil Invaders to talk about how they went from being a small cover band to playing the big festivals and touring with legends like Destruction. Also, we find out where his passion for metal came from and what their debut album, Pulses of Pleasure, is about.

Mick: Just as a brief introduction to Evil Invaders. How did you guys start as a band originally?

Joe: Well we started out in 2007. We were just kids having fun and we could barely play our instruments the we just started jamming, playing Black Sabbath and some Saxon. Actually it wasn’t until 2009 that we had our first gig, back then we played covers a maybe a few of our own tunes playing in Belgium and some of the neighbouring countries. That went on for 4 years and then we released our first EP in 2013 and since then we’ve realised we could take this to a new level, because people didn’t know our music before, it was just our friends and family that came to the show because we had no proper recording. However, once we recorded the songs, we noticed that people were actually singing along, and that was really cool. We put it up online and people just started to like so we started to play more abroad. We played in spain and then shortly after Napalm Records contacted us.

Mick: I’d heard you’d been signed, so what’s it like now having your name associated with the big names that on that label?

Joe: Well that’s really cool, I mean, we weren’t expecting things to go that fast. You know like being a proper band, when we started we were just partying and got drunk all the time. We didn’t expect things to go that fast at all. You really feel it, you know, what the label can do for you. They just let us do what we want to do, but, the promotion they can give you is amazing. If you’ve seen the video for “Fast, Loud and Rude”, they posted it online and it had like 10,000 views in only a couple of days and that’s amazing.

Mick: So you mentioned that at the start you just played covers. How did that translate into playing thrash metal?

Joe: Well, even I don’t know that [both laugh]. I guess as improved as musicians, we just played faster and faster, it’s just a rush. You know, we love to feel it on stage, because the faster and crazier your music is the more adrenaline pumps through you and we love that feeling. We playing Black Sabbath at the beginning because we weren’t that fast yet. As we got better the music just grew with us.

Mick: So, what are you plans for 2015 after the album drops?

Joe: We we’re just going to hit the road and play as many shows as we can. We’ve got 2 tours planned. One of them, we’re supporting Majesty, we’ll play that from mid-March to the beginning of April. Then shortly after that we’re going on a summer European tour with Skullfist and that’s like 5 week, from the middle of May to June. Then we hope to do some festivals, we’ve already got some planned like, Out n Loud in Germany and Metalfest in the Czech Rep.

Mick: So last year you broke out in the UK, supporting destruction what is like touring with them?

Joe: That was really cool. That must have been the coolest tour we’ve ever done. I mean we were there with Lost Society and Destruction. We didn’t know what was going to happen, because, Destruction, their a lot older than us. They could be our dads. It was amazing, we had this really close bond with all of the guys, because we were all on the same bus. There was parties every night, like after every show, Destruction, took all the booze from the back and put it on the bus and we’d just partied so hard, it was really cool. The UK is amazing, it was the first time we were there and it was a great experience, just seeing the different cities. The fans were great too, we were in places we had never been before but everyone was so cool. I think because we’re all thrash metalheads they came early just hear something else but still something they loved.

Mick: Yup, I was on the front row in Manchester. In fact the first time I caught you was at Graspop Metal Meeting last year, and you put on one hell of a show. So on the subject of touring, who would you most like to tour with?

Joe: Of course opening for Iron Maiden would be great, because their be so many people who’d show up. I think Exodus would be really cool, you always get so much energy coming off of them and the fans just go crazy. I think their crowds would be perfect for us. One of our favourite thrash bands.

Mick: Well they’re on tour in the UK this year, maybe you should then.

Joe: May just try that [both laugh]

Mick: Just to talk about your new record for a minute. Who were your major influences going into this album?

Joe: It’s hard to say, because there’s just so much and everyone in the band has their favourites too. Well mine in particularly... I listen to a lot of Black Sabbath, Judas Priest and Iron Maiden, you know the classics, but I dig a lot of thrash stuff too like Exodus and Forbidden. Also, some of the more progressive stuff like Sabotage and Sanctuary for example. Also I’m a big King diamond fan too so it’s hard to say where I get my main influences from. I just take what I like and combine it with what the other guys like. I would say we’re mainly influenced by the 80’s metal scene.

Mick: So as a fan of metal, what’s the best gig you’ve been to as a paying fan?

Joe: Errm fuck! That’s good. Well the first time I went to Graspop Metal Meeting in 2005 that was awesome. There was just so many bands, and I remember watching Dio, I didn’t know him back them but when I saw him I was like “what the fuck?!” [both laugh]. I was just blown away, I’d never heard his music but I was immediately into it and later on I checked it out and just fell in love with it. Also the first time I saw Exodus, that was crazy, the pits were mental and there were two posts in front of the stage, because it was this really crappy venue and there was just the circle pit just going around it. That was was so amazing, you ain't seen nothing like it.

Mick: Would you say those experiences is where your passion for music came from?

Joe: Yeah those were, but the first time I listened to metal was like when I was six years old. On a tape my brother brought me from someone at school, and he said I should listen to it, so i did and I really enjoyed it from the get go. It was just so heavy and evil, that’s when I started to get in to the music. However, I didn’t start playing until I was 13. One day I was with my cousin and we found some Sabbath records. We played “Masters of Reality”, but we played it too fast because we didn’t know how a vinyl player worked, it was like triple speed and the vocals were super fast and the guitar parts were just insane [Joe starts making guitar noises, both of us laughing] and that’s where I first heard speed metal.

Mick: So just to end on. With your new album (Pulses of Pleasure) coming out this year, how would you sell the album to someone who hadn’t heard of you?