The band's hometown show should be a cracker! 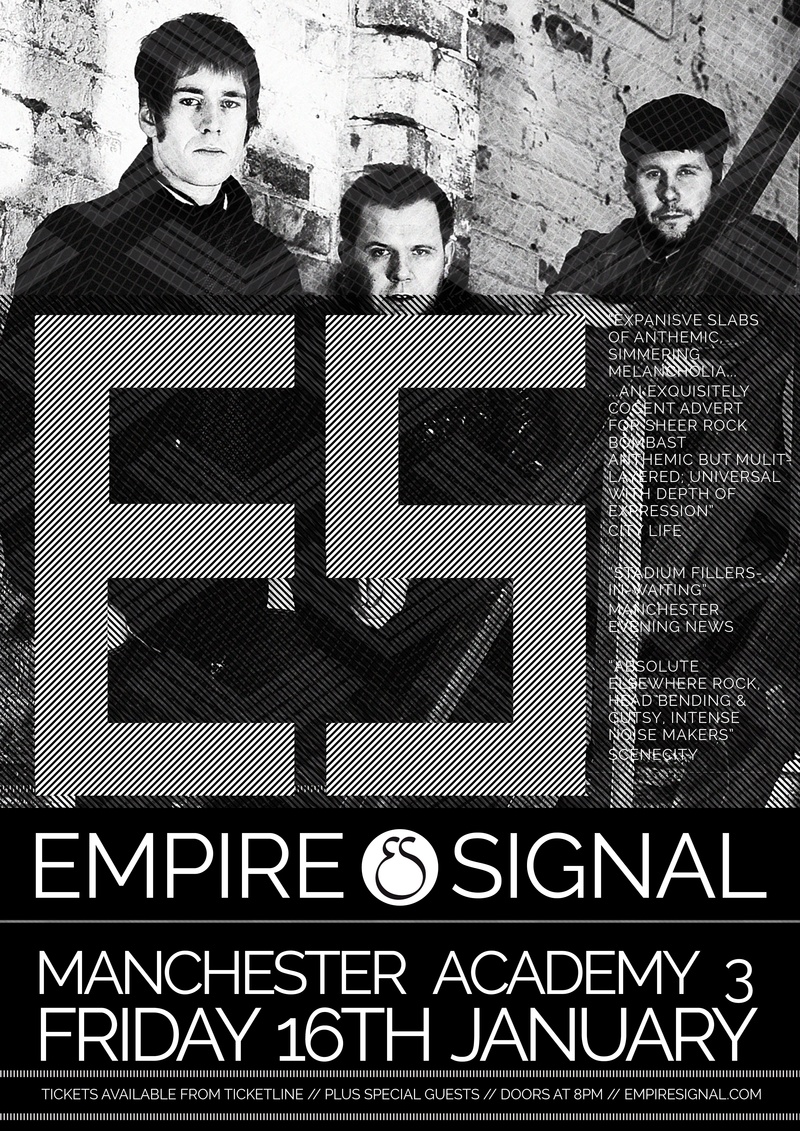 Empire Signal are a rock & roll band from Manchester, England. They write soul bearing, melodic songs and play them heavy and deep. The songs are well crafted with driving guitars, harmonies, pounding drums, throbbing bass and layers of hammond organ.

The bands journey began in 2010 and since then they have forged a cult fanbase in their hometown. Whilst writing and playing, the band have also self funded the recording of their debut album at Big Mushroom, a hive of analogue musical goodnes belonging to The Charlatans. They enlisted the help of acclaimed producer James Spencer (Vaccines, New Order, The Cribs) who has crafted a classic vibe sound into the record.

“The most exciting live band in a long long time” Scenecity

“Empire Signal are the sound of forgotten pleasures, perfect memories... they know the importance of a big, epic chorus, one that could light up any stadium. Their story is one of grit and determination, musicianship honed over the years, they make you sit up and listen, a gleam of sunlight among the clouds.” Totally Vivid

These accolades all come off the back of just ONE single release in 2011. Since then, Empire Signal have been bunkered away in Big

Mushroom studios with acclaimed producer James Spencer. The band have taken a few different turns and were in no rush to settle for average, binning and deleting several attempts at their debut, before finally hitting the jackpot with the Big Mushroom sessions.

Scheduled for an autumn release! The band are excited about their debut album and are staying busy with shows across the country.

However, with an absolute stack of hugely anthemic songs in their arsenal they don’t sound like a band about to release a debut album… each track could be ‘the next single’ there’s certainly no fillers. They play with a raw, visceral energy, at times - overwhelming but certain to get your heart beating! Expect driving guitars, pounding drums, heavy bass and swirling Hammond - fronted by tough, tightly melodic vocals. With Empire Signal, you won’t find the usual cocky attitudes, there’s no posing or pretending - just sublime confidence in their music, but unsurprisingly there’s a bit of Northern swagger!

When asked to describe their influences it’s hard to pin down a singular reference, there are touch points: Nirvana, Radiohead,

Neil Young, Bob Dylan, The Buzzcocks - “all the greats” as they say. All of these influences are interwoven with an unashamedly vintage Rock & Roll sound. They certainly aren’t tribal and are quite keen to point out how they won’t be pinned down by a scene or tag. They are certainly not playing up to any of the hype that surrounds them.

So what now for Empire Signal? Well… after recently returning from a triumphant headline show at London’s famous Camden venue The Dublin Castle they now headline the Manchester Academy in their home city on Saturday April 19th.

Catch this show to see a band at the tipping point of big things!