Can the Manchester metallers build on the success of Bury The Ones We Love? 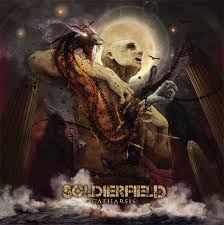 Soldierfield return with a new album, Catharsis. We sent the record to Al Findlay and Kat Hilton, here's what they had to say.

Manchester based Soldierfield is a groovy, melodic metal band marrying powerful vocals with screaming guitars and thundering drums. Today, 17th November, the five piece release their full length album follow up to the well received 2012 EP Bury The Ones We Love.

Quite simply, the album rocks!

Album opener The Light sets the tone for the album: A mellow intro interrupted out of nowhere by relentless guitar riffage and showcasing singer Leigh Oates’ wailing range. Beautiful Life, with its pulsating drums and heavy guitars shows they mean business.

The Only War has a fantastic sound kind of like Metallica’s Unforgiven with Iron Maiden harmony guitars on top. Burn Bright and Monochrome, two chugging metal tracks lead into my personal favourite track Ghosts: A sprawling track marrying great vocal and guitar melodies which fit together perfectly.

New Religion is a great track moving between light, darkness and the abyss with ease, moving back to the light at the end. The title track Catharsis is a slow tempo, arpeggiated ballad which differs from the rest of the album with not a drum in sight. For me, I feel this song seems slightly out of place in that it doesn’t develop into any other dynamic which is at contrast with the rest of the album. In saying that, it does have a great melody.

Nothing Left is a grooving metal number, leads to the the final track ‘Cut The Ties’, epic, with a great chorus, starting with sounds of the sea and ending in the rain.

According to their bio, Soldierfield have “the aim of putting a bomb under the contemporary metal scene,” so, do they?

The Light - The first track starts with atmospheric rumblings before heavy guitar and drums kick in backing up the semi growly vocal offerings from Oates. I can’t help but hear Metallica here, not as good I’m afraid but Metallica like nonetheless. The lyrics aren’t that bad but the vocals seem lacklustre with a tired 80’s vibe that is outshined by the backing track with a thrumming beat that embraces the classic rock scene well. As good as it is I can’t help but feel it’s been done already, I appreciate the talented guitar work with some good riffs that will get your toe tapping and head bouncing, of that there is no doubt, but I am slightly bored by the time it ends after a whole 6 minutes.

Beautiful Lie - Track two does not disappoint with the rifftastic offerings, but again I feel like I have heard it before with the dirty grinding axe work but that’s not necessarily a bad thing. The vocals again here seem outshined once more by the music, Oates' voice seems like it is just not strong enough to work well here, it is lacking the edge and sufficient growl to add emphasis and grunt to the proceedings; Having said that this song fits in with him better than the previous one.

The Only War - A lovely instrumental intro to this one which promised to be a really good song but I can’t help feel let down when it continues.

Catharsis - The title track, a melodic offering here with a soft paced, harmonious song that makes a nice change to the rest of the album but a bit boring if truth be told, displaying the vocal talent well, Oates seems to suit this song more than previous offerings.

All in all I am not best impressed, I can’t say it is bad because it isn’t but neither can I say its good, I honestly don’t think the vocals add anything to the majority of the songs lacking the edge and steeliness needed to produce memorable offerings, the music firmly entrenched in the 80s classic rock vibe almost bordering on cheesy with no stand out “look at us” song that shows off the entire band to the max.

Perhaps the hype has not helped, after doing some reading about them I expected great things and really there is some talent there but I can’t help but feel the bomb they were putting under the contemporary metal scene was a dud.