10 REASONS WHY HAMMERFEST WAS AWESOME 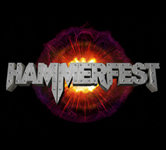 10 Reasons why Hammerfest was awesome

Last weekend saw the Manchester Rocks team (well me and Heather anyway) descend on a holiday camp for metal. This could only mean one thing…HAMMERFEST. Whilst Heather was on interview duty, I checked out…well as much as I could. I could be here all day so here’s a few reasons why Hammerfest was awesome…

Fresh from supporting St Vitus, these guys played the Jagermeister (second) Stage, bizarrely at the same time as St Vitus themselves. Energetic old school heavy rock is the order of the day with Mos Generator, just the way I like it. Great touch was one of the songs being dedicated to the late Clive Burr which got a massive applause.

The Village People of metal brought their own brand of silliness to Hammerfest and boy did the crowd lap it up. Despite being on at the ridiculously late time of 1.30am, they played to a packed out second stage and fun was had by all. Robot dancing (if you’ve seen them before you’ll know all about this) ensued along with a new addition to the set, Crabula. Despite the fact this song is weird as hell, it inspired the replacement of the usual horns with, yep, you guessed it, crab claws. Surreal to see a load of metalheads dancing like crabs but completely normal in the world of Evil Scarecrow and great fun.

Local boys Absolva brought some classic twin guitar metal to Hammerfest and, despite their set clashing with Hatebreed’s (Hammerfest what’s with all these clashes?) they played to a pretty packed out second stage. Tight as ever, it was great to hear the crowd chanting their name after a fist pumping set.

Yes. I know this isn’t very rock and roll but let’s face it, neither are tents. Hammerfest takes place in a Haven holiday camp (it’s not holiday season so there’s no screaming kids or anything) so you get the luxury of sleeping in a caravan or chalet. Genius. How has no-one thought of this before?

The metalhead nectar that is Jagermeister is EVERYWHERE at this festival. Aside from the obvious place of the main bars, you could get a shot of the stuff pretty much everywhere you looked as there were mini stalls selling it too. Great fun. You can never have too much Jager right? ***Insert obligatory disclaimer about drinking responsibly here***

Where can I start with the people? The whole feel of this festival is like one big family. You can get chatting to a complete stranger and feel like you’ve known them for years. You can walk past a chalet playing The Rolling Stones really loud, comment on the fact you love The Rolling Stones and instantly get invited in for a drink (based on true events). Everyone is just so damn friendly.

Vogue Hammerfest is not…it’s so much better. Blokes dressed as Wonderwoman, Spiderman and Batman. People in onesies. Folk in corsets and all manner of leather outfits. Anything goes, and anything is accepted. See reason 6 for why.

Patches, patches and more patches. I do love my patches it has to be said and they were at Hammerfest in abundance. Aside from the obvious merch for the bands playing, there was a Metal Market at Hammerfest which I strongly believe should be at all gigs. Clothes, vinyl, bongs…pretty much anything went here too. I spent a pretty penny on lots of shiny things and some new patches too.

9. No signal in the main stage

This may sound like an odd thing to be awesome but the fact there is no signal for your mobile in the main stage is really cool. I mean no signal whatsoever. Like a black hole. Why is this awesome? Well it means you get to enjoy the music. No checking your phone for texts because you won’t get one. No updating your Facebook (come on, we’ve all done it at gigs). No distractions from the music whatsoever.

Not a euphemism. You could actually get massages throughout this whole weekend. Some lovely folk walking around with little fold up chairs and you could just plonk yourself down for a lovely rub down. Again, not a euphemism.

So there you have it. 10 reasons why Hammerfest was awesome. There are more but you’ll just have to go next year and find out for yourselves won’t you?

Reply nutIgnist
8:55 AM on September 22, 2021
https://buyzithromaxinf.com/ - but venlafaxine xr canada