THE DARKNESS AT THE O2 APOLLO MANCHESTER

The Darkness at The O2 Apollo Manchester

By The Rock Fairy

Saturday night saw me head to The O2 Apollo Manchester for The Darkness, a band I’ve seen a couple of times already and have never disappointed. Here’s hoping tonight would be the same.

Support came from The Wildhearts who I saw not so long ago supporting Slash. I can’t make my mind up about these guys. They’re great at what they do and they certainly have some loyal fans but there’s just something about them live that I don’t click with fully. They’re fascinating to watch but I wouldn’t personally go to one of their own shows. Who knows, maybe having a right good listen to their stuff might change my mind. What I will say is always support the supports, you can find some gems.

Next up were the main attraction. I first saw The Darkness supporting Def Leppard way back in 2003 at this very venue when a relatively unknown Justin Hawkins burst onto the stage in a black and white striped Lycra catsuit (see what I mean about supporting the supports?). Imagine my surprise when he popped up wearing the exact same outfit. I wonder if it was intentional? He looks even better in it now I have to say. After that first gig I rushed out to buy Permission to Land and my love affair with these guys has continued ever since.

This was the first time I’ve seen them in a headlining capacity and I tell you something, they made The Apollo feel like Wembley. Justin Hawkins is the ultimate showman. Camp as Christmas, he strutted along the stage leaving nothing to the imagination (yes that catsuit was tight), belting out hit after hit in that remarkable falsetto voice we’ve come to know so well. Guitarist Dan, ever the quiet one, let his axe do the talking with some mind blowing solos (the solo in Love Is Only A Feeling gave me a lump in my throat). 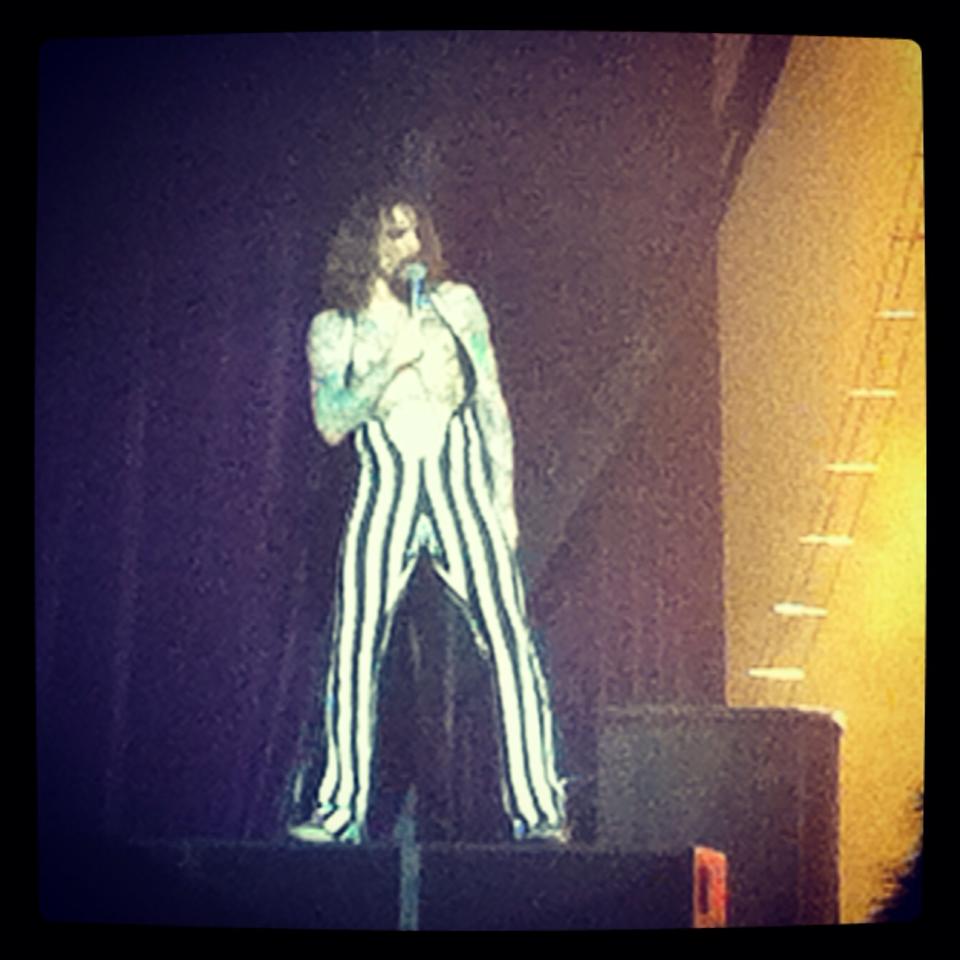 I was surprised at the setlist tonight as I thought it would be mostly tracks from the newest album, Hot Cakes, but it was mainly the older, more familiar songs such as Growing on Me and Love Is Only A Feeling. Whilst I do like the new album, the inclusion of so many older tracks was a welcome surprise. Highlight of the night for me was the encore. Ever the showman, Justin Hawkins decided that being on stage was boring and decided to throw himself into the pit along with his guitar, parading round on some dude’s shoulders. Genius. That to me sums up this gig. I left the gig smiling, comforted that rock and roll still well and truly exists. Oh, and it wears spandex.

For more on The Darkness: http://www.theactualdarkness.com/

For more on The Rock Fairy: http://therockfairy.co.uk/