LORDI 'TO BEAST OR NOT TO BEAST' 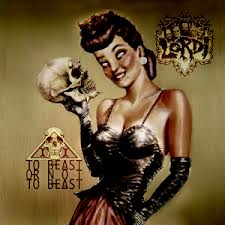 Lordi – To Beast Or Not To Beast

I don’t really know how I feel about reviewing a former Eurovision winner. Who am I kidding? I couldn’t wait to listen to this bad boy. Lordi were my guilty pleasure a few years back and I sort of forgot about them. I was so chuffed for them when they won Eurovision a few years ago and whilst they might come across a novelty act with their costumes etc, they’re actually damn good. I like to think of them as the Abba of metal. Only a bit cooler. Every song is catchy as hell.

To Beast Or Not To Beast opens with the anthemic We’re Not Bad For The Kids (We’re Worse). With fast paced riffage and frantic drum beats, this song sets the scene for the rest of the album and is pretty much a big F**k you to all those folk who bang on about rock/metal corrupting the youth of today.

I Luv Ugly shows off the more atmospheric 80’s side of the band. Reminded me a bit of Dokken having a sing off with Def Leppard. Yes, really. Bet you’d love to see that one.

Upcoming single The Riff is a feast for all you keyboard rock lovers (Europe’s Final Countdown anyone?). Granted “The Riff” is more keyboardy than guitar but a riff is a riff. There’s some pretty sweet guitar riffs in there too though and I wonder how many skins the drummer got through on this track?

Something Wicked This Way Comes, and it’s the vocals on this one. I mean wicked as in mint, not bad. I’m down with the kids. This is power metal at it’s best, complete with choir type backing vocals. Everything about this song is epic.

I’m The Best…at full on thrash anthems. Yes this one is abit thrashy which I didn’t really expect but it works. Reminscent of pre-Black album Metallica but a bit cheesier. It’s not full on Stilton though, it’s still pretty classy. Think Philadelphia Light.

Horrifiction starts with a haunting child-like voice (think Chucky but cuter) charmingly repeating “I’m gonna kill you” before exploding into something resembling a rock version of every 80’s TV horror theme you cant hink of. This song is actually pretty terrifying. Especially if you remember watching silly 80’s horror films like Nightmare on Elm Street.

Happy New Fear carries on the trend of catchy as hell anthems that make up this album. Seriously, you can listen to any one of these songs once and they’ll be flying round your head all day. Happy happy new fear, happy new fear.

Dolls creep me out. As do those music boxes with little spinning fairy things. So imagine starting a song about a doll (a schizo one nonetheless) with something resembling the terrifying music from one of those and you have arecipe for the song Schizo Doll. I don’t know whether this is relating to a former flame of Mr Lordi but it’s a great sing along track, especially once the twin guitar madness kicks in. Miss Schizo Doll should be honoured.

Candy For The Cannibal is by far the best way you could ever serenade a loved one. This is like Lordi went out on the pull with Steel Panther and wrote a song in honour of that night. “I’ll be t-t- t-enderising your meat”. Really? Genius ha ha.

SCG6: Otus’ Butcher Clinic wouldn’t be out of place on one of those gore fest films like Hostel, with lots of weird squelchy sounds at the beginning which really make you feel uneasy. I take that back. Scary as hell. Because there’s no visuals to help you out, your mind really goes to some weird places wondering what on earth all the sounds are (dead body being chopped upor just a nice Sunday roast being prepped?). I can imagine this opening a show, so it’s strange that it closes the album. Maybe that’s the intention. There’s nothing normal about this band so why not eh? This track randomly turns into alive drum solo complete with an audience cheering. I love a good drum solo it has to be said, it’s just so oddly placed.

I think this album will really divide opinion, you will either love it or you’ll pretend to hate it and secretly love it. You can imagine every single song on this album being played live without a doubt. I can’t pick a weak track. I’m still a little baffled by the placement of the last track though.

Much like the cover of the album, this is vintage rock (wow, is the 80’s vintage now?) with a classic heavy metal twist and a nice sprinkling of electronica. To Beast Or Not To Beast? Go Beast with Lordi. I don’t think you’ll regret it. I didn’t. I went and dug out every 80’s horror film I’ve ever watched because of this album. That’s no bad thing.

Reply Jonathan
3:16 AM on February 8, 2013
I can explain the odd placement of the drum solo. It was recorded in Paris 2010/11(?) and it is the drumsolo of their former drummer Otus who died last year. This is sort of their tribute to him.